Even if the original participants stuck to every resolution the planet will sail past the 2 degree point that was thought to be the point at which catastrophe might be averted. Imagine My Relief attempts to shine some light on New Zealand’s part in this problem.

Where two men and a Gen 1 Leaf with not much juice do the Wellington to Auckland run in less than a day. Take regular breaks when driving. 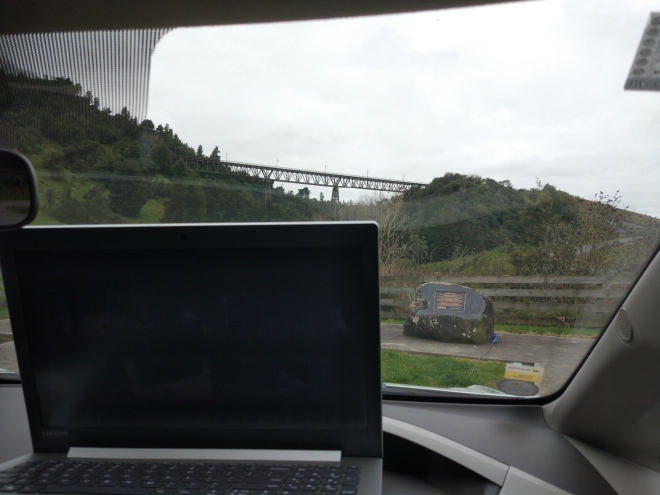 6:00
I pick Gabe up from Miramar. The night before I calculated the hours it would take, and the number was bigger than I expected. Still, no point in bringing that up now. The road trip has started!

6:30
Porirua. I thought we’d get a quick top-up at Serlby Place to repay the sprint we took up Ngauranga Gorge. Someone destroyed the charger plug overnight. Now wishing I’d taken my time and skipped the turn-off. Called ChargeNet who told me they knew about the damage and that all the other chargers looked OK.

7:15
South of Otaki (15km). Damn. Really should have taken it easier. I can make it to Otaki in one go when I do, but this time we’re a bit low. Pull over and start up the generator. Wasn’t expecting to use it quite so soon.

8:23
Otaki New World car park. Now we’re cooking. The run to Palmy is a little tight because its quite a climb. The road through Shannon is quiet enough and we’ll make it OK but we need a full top-up here. Pull out at 9:15.

11:50
Damn (again). That Palmy charge looked a little light. We only picked up 11kWh. We’re on a hill top trying to play badminton in a breeze while the generator runs in the background.

13:28
Now we’re in a car park looking at a rail viaduct and running the generator again. Time to open up the laptop and watch the adventures of Karl Pilkington.

14:36
Damn (some more). We’re really not getting much juice out of that generator and I don’t know why. Decide to make a run for it and see how we go. We slam smack into a huge climb and at the top of it the battery has flatlined. Then we get some luck. A cafe on the left, just where we need it, and it has some caravan sites. We are maybe 5km from the fast charger so we don’t need long here, but we would have been well stuck without it. They make a pretty decent pie too.

15:02
Mangaweka! They make a terrific eggs benedict. While we’re charging a guy from Petone with a plugin hybrid starts talking with us. He’s next in line but happy enough to wait. He’s talking about his grandchildren and the soaring carbon levels. Preaching to the choir of course. Its not a cheerful conversation because its dawning on us all that EV users are laughably small minority and we look absurd to the rest of the world. Which I wouldn’t mind if only climate change really was a conspiracy by the Chinese. I pray for this to be true every single day. Pull out at 15:37.

16:18
At last we get a break. The run to Taupo is a breeze since the fast chargers are more closely spaced. Too late for the army Museum (its cold up here) but we get to climb on some tanks. Pull out at 16:49.

17:41
Turangi. Maccas. Yes we are participating in the climate chaos that is the fast food industry. Bite me. Roll out at 18:08.

19-ish
Taupo. Free charger at the fire station. I learned on the last trip that there are two kinds of fast chargers. The ones we see around Wellington are thin plastic fascimilies of petrol pumps. They work just fine but are surprisingly minimal. The other kind are solid metallic pill boxes with touch screens. They are more common as you head North, and many of them are free. Both work just fine, though the metallic ones put on a better show. They whirr and hum and vent heat out the back. I have no idea why they are so different, but any variety on a trip like this is sort of welcome. As long as we get the juice.

21-ish
Damn (some more). The hills from Taupo were huge and we’re 26km short of Rotorua with 11km worth of juice in the car. And its dark. We just passed the Waiotapu tavern (they provide a wall charger) but they’re not answering the phone. And the generator won’t start. We might be stuck here overnight. And who knows what we’ll do in the morning. The laptop is dead now so we can’t even watch Karl Pilkington to take our minds off the problem. I start to futz with the generator. Its very low on oil. Using a torch and a used coffee cup we pour increasing amount of oil into the generator. When we try again it coughs for a while then generates huge plumes of smoke. The irony is not lost on us. We wait for them to clear, but they just get worse. I describe the time I thought my Camry had blown a head gasket, since it looked the same way. Then the penny drops. That was because they put too much oil in at the garage. We drain most of the oil back out into Gabe’s spirulina bottle. Now it works. We get the sleeping bags out and watch Aqua Teen Hunger Force on his cellphone.

23:14
Rotorua. We’re going to need a big charge to make it to Cambridge. The Kaimai’s are waiting. I discover that by reloading the fast charger after completion I can convince it to go to 100%. Pull out at 00:06.

01:23
Made it with a few kms to spare. Cambridge. Loads of big retail outlets that look open because all the lights are on. But nothing is open because it’s one in the morning. We stroll around a bit and leave a 01:52.

02-ish
Hamilton. Free pillbox charger so I can’t be sure of the time.

03-ish
Te-Kauwhata. Google leads us down an abandoned road to a warehouse. Weirdly, there is a free pillbox charger waiting for us. We have run out of conversation, which oughtened be a surprise.

04-ish
Greenlane. Another free pillbox, this time in the Maccas car park. We learn later that Hobson street is the same, so, fast food bill aside, driving around will be free for us in Auckland.

04:47
Annouce our arrival to anyone back home who has trouble sleeping. Feel like Jean Batten. We’re returning in a week and already I’m figuring out how to manage things so we make better time.

It was a bit of a marathon, and most electric vehicles would have an easier time of it. This time next year it will be easier too, since new chargers are appearing all the time. Still, it seems a little mad. Sarah Thomsen, the woman suing the government over its tepid response to the Paris accord, told me about appearing on The Project where David Seymour baited her on the point that she drove to the studio from Hamilton in a petrol car. So either way you kind of look like you’re doing things the wrong way. We’re not. We’re purposefully trying to swim against the tide. There’s a difference.

Yes some of the electricity is created by releasing CO2, and yes the processes to create the car and its batteries release CO2 as well. Which just means they also need to change. We burned a couple of litres of petrol too. That’s because the privately run charging network is still in its infancy. Thanks again for nothing National.

The battery-electric car is the best alternative we have for roads now, and to argue that they aren’t good enough is to miss the point that not trying to reduce emissions is the one thing we’ll look back on in anger and regret.

The difficult journeys along the way are a different story all together. The point is not to do them alone, if you can help it. If you’re going to be stuck on a freezing hilltop in the middle of a night with broken equipment and fading hopes it helps to have someone with a sense of humor by your side. These are the moments you wind up telling stories about.